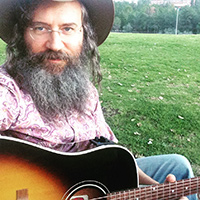 International recording artist Lazer Lloyd creates a unique mix of Americana roots, folk rock and outlaw country blues with psychedelic spice. His new breakout hit "Backstreets" pushed Lazer's Spotify streams over one million. Lloyd's 122,000 strong Facebook community around the globe enjoy sharing clips from his concerts when he hits the road everywhere from New York and Toronto to Bulls-Gap, Tennessee, Lindale, Texas and Mammoth Lakes, California as well as weekly personalized live feeds from his back porch overlooking the Jerusalem mountains. He responds personally to a flood of comments and messages, noting, "I see that my songs really touched people, each in their own way. This is unbelievably gratifying and humbling to me." His new album, "Freedom's Child", features the track "America" - a call to overcome divisions and unite around common love of country. The album, "Freedoms Child", gained 150 points on the AMA chart in the first 28 days after release. Lazer's instrumental Esquecas Do Mundo (Forget the World) has become a beloved track with Brazilian fans...

BIO: In his youth, Atlantic Records showcased Lloyd and paired him with producer Garry Tallent (E-Street Band) to record in Nashville. Love and inspiration led the singer/songwriter to relocate his career to Israel. He moved his vintage guitar collection to the Middle East and joined psychedelic Israeli jam band Reva L’Sheva. His solo 2012 electric release, “My Own Blues,” attracted international attention. In 2013, Lazer joined forces with his manager Yo Seidman to create Lots of Love Records and release a compilation, "Insides Out”. In 2015 his new studio album, "Lazer Lloyd", won widespread praise in the music press and spent twelve weeks on the Roots Music Report chart, won #3 RMR Blues/Rock CD of the year.

"He puts soul into every note he sings and plays." Tim Parsons, Tahoe Onstage

"Could it be that a rock and roll, blues, folk artist, who adds a tinge of the psychedelic, is America's inheritor of the mantle that was long ago left by Bob Dylan, Joan Baez and Judy Collins? ..." Life & Arts, The Wilmette Beacon

Lazer Lloyd has been added as an artist you support!