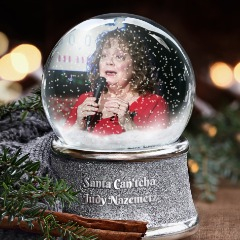 JUDY NAZEMETZ is a genre-non-specific song humorist, a singer-songwriter who brings the funny to everything she writes.

A Central Jersey girl, Judy was brought up on polka and Mitch Miller, with a lot of rock and folk sprinkled in. Then, she saw Davy Jones as the Artful Dodger in Broadway’s Oliver! and musical theatre (and Davy Jones) became her love.

Judy’s a veteran sketch comedy and improv performer, learning her stuff as one of Fred Willard’s MOHOS, NYC’s Chicago City Limits, LA’s Wrought Irony and Theatresports. She can create songs on the spot from audience suggestions, and has done so in folk, rap, country, holiday, reggae, opera, Irish, jazz, gospel, and polka styles. And she’s taken her love of genre hopping into the recording booth.

Judy’s albums VARIETY PAK and BALANCING ACT have been played all over the world, from Australia to Macedonia to the hinterlands of central New Jersey. In the UK, her Andrews Sisters style jazz song about the ups and downs hamster ownership, THE HAMSTER DIDN’T DIE TODAY, won Best Blues Song of the Year on SevernFM’s Blues Hour with Dr. Wart Hoover. Judy’s been featured on radio station WTBQ-93.5 FM’s “Hootenanny Cafe” with John Stein and can be seen and heard at joints up and down LA’s Ventura Blvd, and on reruns of shows like Will & Grace, Ellen, and her more than 100 episodes of The Tonight Show with Jay Leno. Judy’s scream was picked to be part of the NBC Library.

Judy’s third full album, “MEAT BIRD IN BEIGEVILLE,” is available January 14, 2022. What’s the story with “Meat Bird” you might be asking? “Well,” as Judy says in her best New Jersey voice, “Ya gotta listen to find out.”

Booking Contact
judynazemetzmusic@gmail.com
Become a fan!
Get notified when Judy Nazemetz plays locally and help support her career. Join the Undiscovered Music community now to become a fan and support all your favorite artists - it's free to join!
Support this Artist!
Help support Judy Nazemetz during these difficult times by donating directly to them:
Donate via Paypal