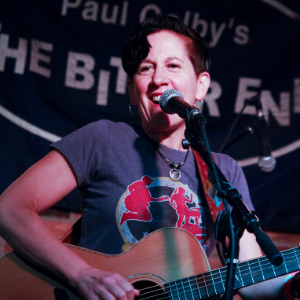 Award-winning Singer/songwriter/multi-instrumentalist Lisa Brigantino is a songwriter whose original songs span groove, genre and topic. Although she does perform as a soloist, she regularly performs in a duo with her sister Lori Brigantino. They’ve performed Lisa’s original songs at a variety of house concerts, clubs, coffeehouses and festivals. Notable performances include joining Terre Roche of The Roches for some classic Roches songs at “If These Walls Could Talk - A Tribute To The Bottom Line" hosted by Paul Shaffer in NYC and appearances at the Ladybug Music Festival, New Jersey Folk Festival (singer/songwriter showcase), The Black Potatoe Festival, The Pleasantville Music Festival, The Rockland Bergen Music Festival and Maplewoodstock.

Brigantino released her 3rd full-length album I’ll Waltz Before I Go last October. The Daily Country says “Throughout the thirteen tracks, Lisa seamlessly blends genres from Folk to Americana, Country, Rock, and Old-Time, even incorporating some Gypsy-Jazz for good measure.” Singer-songwriter/musician Terre Roche, founding member of The Roches says “I’ll Waltz Before I Go is one of the best things I've ever listened to! Every aspect of it came at me like a steamroller. The songs are so interesting. Lisa slides effortlessly among all of the many influences she's absorbed over the years." Lisa is a former original member of Lez Zeppelin, the world’s first all-girl Led Zeppelin tribute band and toured internationally with the band for a number of years playing bass, bass pedals, mandolin and keyboards. They recorded their debut album with the legendary Eddie Kramer and even headlined Bonnaroo in 2008.

Lori Brigantino is a singer and multi-instrumentalist. She can be heard singing and playing on I’ll Waltz Before I Go and her vocals can be heard on Wonder Wheel as well as Lisa's first album, A Brooklyn Night. In addition, Lori is a trained actor with Off-Broadway, Off-Off Broadway, TV & film credits. In addition, Lisa and Lori also have a wacky musical-comedy act called The Vickie & Nickie Show. Please visit https://lisabrigantino.com/ for more info.

Lisa Brigantino has been added as an artist you support!