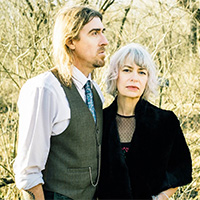 Society of Broken Souls, the Folk Noir songwriting duo of multi-instrumentalists Dennis James and Lauryn Shapter, never expected the name of their band to become such a lightning rod. It just seemed a fitting name, one that resonated deeply with each of them, as well as with their most dedicated fans. But a lightning rod it seems to have become.

“There is a growing propensity in our culture to show ever more curated versions of ourselves, where everything is photoshop perfect and everyone is living the dream,” Shapter explains. “But that’s just not real life and it only seems to leave people feeling more isolated. We got tired of the lack of authenticity we saw around us and decided to shine some light on the broken bits, but still have fun while we were doing it.”

Shapter and James know a thing or two about broken souls. While their music is deeply rooted in the time-honored tradition of storytelling, their songs move seamlessly from the darkly fictitious to the profoundly personal — meaning they come by their name honestly. With not just a few scars and more years behind them than ahead, they each have stared down their own personal demons in order to serve the art form that has never let go of its hold on them. Though they tried their hand at the straight life, it never took. “Music is the only thing that makes any sense,” says James. “Nothing else matters.” In their return to music, they are discovering true artistic freedom and rekindled joy in pursuit of their craft.

Called “a songwriting powerhouse” (Ben Kieffer, Iowa Public Radio), the duo performs their own brand of American roots music. While they have their roots as an acoustic duo, their live show has blossomed into an expansive setting for weathered characters, tough topics, and quiet beauty. Fiddle, drums, keyboard, and acoustic and electric guitars, in intricately woven and varied arrangements, create a wide, dynamic palette. As they take turns singing lead and harmony, the pair paints a vast emotional landscape, ranging from the rebellious and jubilant to the introspective and heartfelt.

Midnight and The Pale, the follow up to 2016’s Things Still Left Unsaid, is their second album under the moniker Society of Broken Souls and their fifth collaboration. Released in April, 2018, the new album once again sees James and Shapter writing, arranging, producing, and engineering the 10 song collection, as well as performing all the parts. The album title offers a glimpse into the lyric content of the songs: the interplay of light and dark, and the beauty that results when they are allowed to walk comfortably side by side. Midnight and The Pale solidifies their relationship with the muse, as they sink ever more deeply into unique musical backdrops upon which to tell their stories.

So in spite of the conventional wisdom that says to let go of childish dreams and leave the rock and roll lifestyle to the young, James and Shapter are reinventing their lives with a renewed vigor. As part of that renewed commitment, the duo purchased a 22 year old RV and retrofitted it to hold the myriad instruments they bring on stage. They hit the road in 2017, covering over 22,000 miles and performing nearly 100 shows in 18 states and found it suited them well. They continue to log the miles, make new friends, and keep the music going.

Above all else, James and Shapter sing their truth, and in doing so, offer a solace that comes from bringing the broken-hearted jewels out of the darkness. By having the courage to look to the cracks in their hearts and the chips on their souls, they have discovered a redemptive beauty. It drives their art, celebrates all of life, and invites the listener to walk through the fire with them — and to find freedom, strength, and joy on the other side.

Society of Broken Souls has been added as an artist you support!