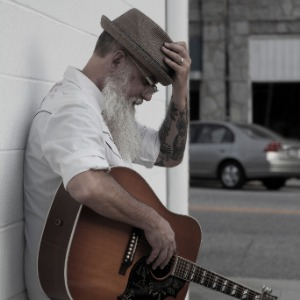 “Alan isn’t just versed and influenced by the Americana and alt-country byproducts, but the old school country and rock origination points of the music." - Saving Country Music
-> read more
Alan Lee Edwards has been a songwriter for 25 years, and became the main singer, guitarist, and songwriter for the band Lou Ford not long after the breakup of his previous band, Chocolate USA (who also boasted Julian Koster of The Music Tapes and Neutral Milk Hotel). If there was a Most Beloved Band metric in the band’s adopted hometown of Charlotte, NC, Lou Ford still might garner some votes, a decade or more after the band dissolved. Punks, alt.country fans, and glam rockers alike agreed there was an honesty there, an authenticity not build on outward style but inner substance. The songs spoke mostly of the ebb and flow of personal relationships, and of the Sisyphus-like (yet not infrequently joyous) existence most of us south of "middle-class" immediately recognized as our own. They had critical respect, too, and from some of the best music magazines in the world -- Uncut and Mojo both talked the band up breathlessly, and they shared space on British "best of" compilation CDs with the likes of Lucinda Williams, Richard Thompson and Paul Simon. Often lumped into the Americana catch-all, they nonetheless mined the sunnier side of the street musically, with Edwards’ biggest influences (Beach Boys, Big Star, Nick Lowe) never far from the surface. The very first published music review I ever wrote was a 300-worder on Lou Ford's debut full-length, Sad, But Familiar. As the years have passed, I've gone on to write thousands of other reviews. Some in my humble opinion, were "better" -- perhaps more liberally sprinkled with wit, or possessing a keener sense of the nuances of the music being covered. But something about that review still sticks with me: it was (if nothing else) deeply felt, and if indeed the words served well, it was because they served the point. I think this is something that A. Lee Edwards and I have in common: a belief in a plainspoken good thing, without unnecessary or undue adornment (unless of course you’re talking about guitar solos, in which case all bets are off). More on this in a second. After Edwards’ post-Ford band The Loudermilks folded, Alan did as he had famously promised in song years before and took his things and moved up to the mountains. Along with wife Hannah, they opened the critically acclaimed and customer-full farm-to-table restaurant Yonder in Franklin, NC. With Yonder off the ground and thriving, Edwards has revisited his burgeoning back catalog of songs and become something of a road warrior in the process, often playing more shows in a month than the ‘Ford managed in a year. He’s travelling lighter, literally and figuratively. He requires little more than an amp and couple guitars for company, and he’s moreover quit drinking, which can eat up your guarantee and your go-gettem’ in short order if you let it. (He’s also mellowed some, but more in the way that balsamic vinegar mellows into a sweeter vinegar as the years go by.) He’s begun writing anew, and if the man’s past efforts are any indication, you’ll have some new favorites to sing in the next calendar year. Speaking of: the music, I’m proud to report, is as evocative as ever. It’s not dance-y, as ever, and it doesn’t dance around the point. It is music with ghosts singing the third register, to be applied as the listener sees fit. It is music that is personal without being personal-specific — call it “universal personal.” It is a sort of composting of shared experience, something that is rather impossible to fake without a huge helping of empathy and a great set of ears. It is music that is direct, and which can occasionally make you uncomfortable, but later (sometimes within the same song) console you like that old friend you rarely get to see: the one who, despite the tears and years, always “gets you” just the same. Timothy Charles Davis East Nashville, Tennessee For fans of: ‪Neil Young‬, ‪Townes Van Zandt‬, ‪Blaze Foley‬, ‪Gram Parsons, John Prine

Videos of A. Lee Edwards Performing:

Fill out this form and we'll let the venue know you are interested in attending.

A. Lee Edwards at Berkeley Cafe 10-10-2021
Become a fan!
Get notified when A. Lee Edwards plays locally and help support his career. Join the Undiscovered Music community now to become a fan and support your favorite artists!

A. Lee Edwards has been added as an artist you support!