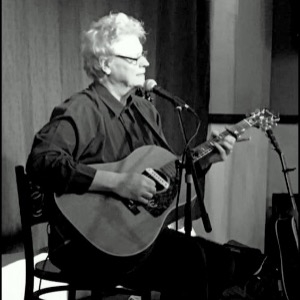 With inspiration and influences from early classic country, blues and pop, and from his beginnings in Huntington West Virginia, Jeff Smith is folk artist with blues, rock and pop sensibilities. Jeff  counts JJ Cale, Randy Newman, John Lee Hooker and many other blues folks and local artists as spiritual mentors.
Jeff’s bluesy drawl slips in and around his guitar playing that is a combination of fingerpicking, flat pick strumming and banjo frailing. He tells elongated and elliptical stories about the songs, their characters, his family and his life and how they are all connected. Smith says “on a good night the stories and songs ride on top of a funky kind of country blues pop stomp”.
Jeff’s tune “I Never Wanted You to Go” from the A Little Romance cd was placed alongside Roy Orbison, Ellis Paul, and The Bacon Brothers on the Trinity Rose Foundation release “Vision, Hope, Love”. Mike Cotter, Washington Area Music Association Award winner, also covered one of the rockers from The Human Wilderness, “Hideaway Rockin” on his “Radio Saves” album.  ?
Jeff’s songs have been featured on US television on the programs “The Young and the Restless”, “Army Wives”, the independent murder mystery, “Teach Me Tonight”) and in a European ad campaign for Opel automobiles.  ?
Jeff created the character Junior Buggwater a drifter and a charlatan rainmaker for the stage production of "Rain Follows the Plow". Jeff also co-wrote one of the highlighted songs “Show You the Rain”.  ?
Jeff performs solo and with his band The Human Wilderness and The Human Wilderness String Band in nightclubs, house concerts and festivals across the Mid-Atlantic region. In February 2018, Jeff launched the weekly "Tunes at Noon", an informal FB Live event where he performs original tunes and covers to break up the work week. Tune in, listen, or play along!

Booking Contact
Jeff
humanwilderness2014@gmail.com
Become a fan!
Get notified when Jeff Smith plays locally and help support his career. Join the Undiscovered Music community now to become a fan and support all your favorite artists - it's free to join!